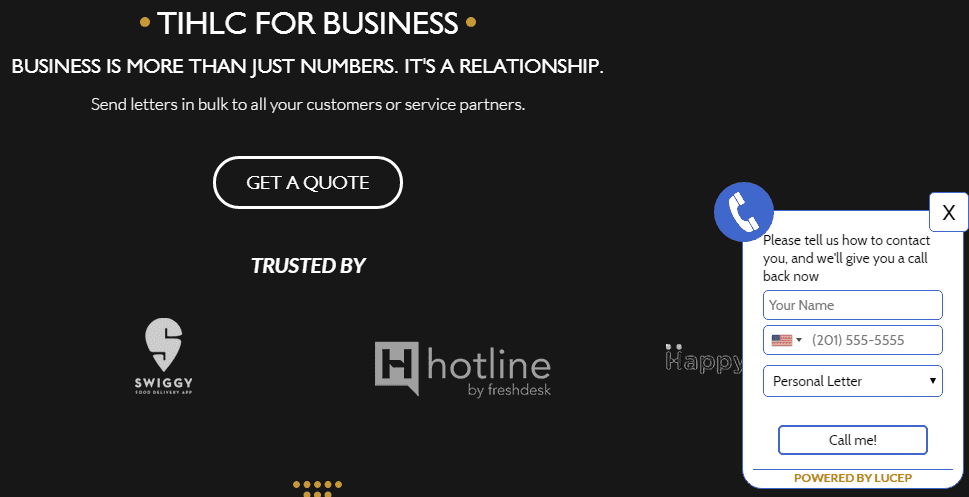 Make leads while the media spotlight shines on you seems like an apt analogy for today’s online startups. Coverage from a big media publication is a good thing, but what happens after your 15 minutes of fame is up? Your traffic drops back to normal, and you don’t have anything to show for all the hype other than a piece of archived news on the web.

So if you’re going to get a flood of traffic, gear up to generate as many leads as you can during that short news cycle. This is what Lucep client THLC did very effectively, converting a very nice story about them into a large number of leads while the traffic is still flowing hot.

The Hand Written Letter Co (THLC) is an unlikely startup success story, founded in Oct 2015 by Ankit Anubhav and Jashwanth Cheripally who teamed up to revive the lost art of handwritten letters. They will write and send, on your behalf, both personal as well as business letters. The response to the service has been phenomenal not just for personal letters, but also from brands and corporate customers. This is what THLC’s internal stats say about the impact of their letters:

• 83% chances of getting business meetings;

• 64% increase in repeat purchases; and

The overwhelming response is partly due to the novelty of the retro communication – customers and recipients of a handwritten letter are pleasantly surprised, and it’s tangible. People remember the sender, whether it’s a person or a business. Also, one of the key components that differentiates this startup is that they can also produce the content for the letters, if required. Another point is that they cater to both consumers and businesses.

The startup was doing well enough, but their traffic and lead generation spiked heavily after Yourstory.com published an article on them. The title of the story said it all – “From IOUs to I Love Yous, this startup is reviving the lost art of letter writing

The title was catchy enough, and Yourstory has a wide reach. It was enough to make the article go viral on social media, with hundreds of shares on social media, and it even started circulating on Whatsapp groups.

One of the things the article mentions is that THLC’s business clients are getting a 77% increase in conversions among their consumers who are getting the handwritten letters penned by THLC. They already have 9 corporate tie-ups and is growing at 150% month on month.

Such statistics and the positive social buzz literally got the phone ringing for THLC. Their Lucep widget started registering an increase in traffic and, more importantly, an increase in the number of people requesting callbacks

Had they not installed the widget, the spike in traffic would have been had a feel-good impact for 2-3 days, but there would have been no long-term impact on sales. Now the company is flush with leads, and they will be writing a lot more letters in the near future.

This episode of how THLC managed to convert free media into paying customers should serve as a case study for websites and businesses looking to increase sales by generating more leads online.

Specifically, you have to ask yourself the question – Is my website ready to convert traffic into leads and customers?

There are plenty of studies about what happens when your startup gets covered by well-trafficked media publications such as Mashable or Wired, but it has come to be known as the Techcrunch Effect. Some get the traffic and nothing much else, while others claim their online presence and/or business has skyrocketed. It all comes down to whether your website is able to convert the traffic.

Conversion rate optimization (CRO) platform VWO shared stats after being covered by Techcrunch. Ironically enough, the conversion rate for the Techcrunch traffic they got was 34% less than their normal traffic.

On the other hand, social networking analytics firm Conspire saw a wide range of benefits from the coverage, which they credited for generating 25,000 user sessions, and expanding the Conspire network by over 10 million in 6 days.

Apart from the direct traffic, the company benefited from hundreds of social shares and front page coverage for their site on the HackerNews front page. Not to mention posts on other sites that saw the Techcrunch article and wrote about Conspire in different ways.

These two widely different results should make you think about how your site will respond. In the case of THLC, their conversion rate from the Yourstory coverage was optimized by the presence of the Lucep callback widget. Is your site ready for the Techcrunch effect? Nail it down by implementing click to call so that your website visitors can directly talk to you.

• Increase lead generation by up to 48%; and