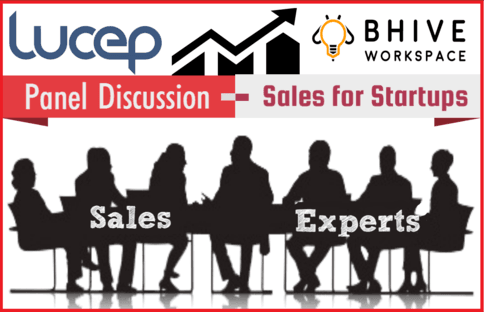 Enterprise sales is far easier now with social CRMs and everyone from CEOs to purchase managers and sales reps connected to each other on the same social platforms. But technology can only get you so far – like a foot in the door. It can’t help you close enterprise deals with complex sales cycles where you need to invest blood and sweat.

These are the kind of things that Lucep aims to help you with – not just through our instant response callback platform, but also through blog posts like this, where we share B2B sales tips and best practices provided by industry experts.

The video below is from a recent ‘Sales for Startups’ event organized by Lucep and the BHIVE workspace. In the video, panelist Puneet Chhahira, Global Marketing Head at Infosys Finacle, EdgeVerve, talks about how to approach enterprise sales and get through to the phalanx of multiple decision makers in the same company.

Vijetha Shastry, BHIVE: You are from a big brand, and you have worked with some very big companies, banks, financial institutions. And those are the big beasts, difficult to tame, difficult to handle, maybe lots of hierarchical decisions, you know you are from a very big company, and you know what you are doing. So, to the startups who are here in our audience and listening to us, what are some of the tips, what should be the ways to go about… from managing to break in, to meet the right person and then get the business.

Puneet Chhahira, Infosys Finacle: Sure thanks. I come from a very large organization – Infosys, and I am responsible for the brand Finacle, which is a banking product unit at Infosys. The great news – it’s the most popular product, IT product from India, globally. But you have interesting challenges. Challenges first, let’s start with what we talked about – selling into large organizations.

I think we all learnt when we were in college, or you know, in our business, that you ought to have a very clear definition of – What is your target segment? I mean, irrespective of whether you are in a consumer business or a B2B market, and unfortunately my experience says we try and take a shortcut there. For most of us, we try and say “hey my target audience,” let’s take an example of large banks. Okay, but large banks in India are very different from large banks in US. Okay, no, no, no, my target audience is large banks in say… let’s say in India – considering we all can relate to it. But hey, large bank like SBI is very different from a large bank like ICICI, okay. So where I’m going with this is, I think the first part about creating a value proposition or having a.. creating that attraction in your target segment is very clearly defining who you want to talk to, what you want to get done and it goes way deep, and most people actually don’t end up going there.

So, for our business, you know, when our marketing works, we try and define, obviously beginning with which countries we want to work in. And there is a clear framework which we will use on whether I should be even entering the country or not, even if I have a very significant lead. Because there is a cost of every lead, right? And we work in a banking product, which is in some sense – banking looks like a science from outside but it is actually a practice. Banking in India is very different from banking in US, for example. And while it’s easy to say it’s only regulation, it’s more than regulation.

Umm… so first having a clear definition of which regions you want to work in. What kind of banks you want to work with? I think, since it’s a startup forum, i think the easy example would be dividing them into 3 categories. The progressive one – the innovation leaders, the fast followers, and the laggards. Right? If you are a Fintech, I would imagine, you run a something which is unique, something cool, something which is out of ordinary, I would go after working with either the top innovators or the top segment of fast followers. Why is it perhaps top innovators? Because lots of top innovators want to do everything themselves. They believe they have got the best, and in some sense they have. They have the right people, the right culture. That’s the reason they are the top innovators. So getting clarity on what are the kind of organizations I want to work with is absolute important and it has to be finite. It can’t be just a one line – i want to work with the top innovators in US. You have to obviously define them, as specifically as possible.

The second thing is in those organizations,who are the people who are going to be the buyers of what you are going to sell. Who are the people who are going to be influencers in those organizations where you are going to sell? That’s very critical because for IT, it’s easy to say, it’s CTO or CIO, but that not the case. A lot of those sales are not driven by technology groups. A lot of them are driven by actually business, particularly if you have anything around customer engagement, CMO is very important. Head of business lines are very important. So you have to have a map of who are your buyers, who are your influencers.

But, that doesn’t end there. The second thing is the personas. See, people like in my business, I come across people who are really really close to their retirement, because you know, bulk of our solutions, people buy not for a couple of years but for decades. Stuff like what we sell in core banking, that’s like a heart of a bank. If there is a trouble there, everything falls flat. So, it’s the CEO is involved, a CIO is involved, but you have to be careful. What persona are you dealing with? A CIO who is two years away from his retirement is most risk averse. He doesn’t want to leave with that risk. So there are certain thread of projects he’ll never sign, irrespective of how much is the urgency, there are ways and means of dabbling in their organizations, of passing the buck. The next guy will solve the problem, it’s not for me.

Also you have to be clear – what kind of personas you want to go after. Otherwise you’ll feel I want to work with Bank of America, without realizing the people who are working in Bank of America have a very different drive. You know, the way they want to deal with things is very different. So you have to have that kind of clarity. I think to me that’s your foundation. If you have clarity, then you have certain segment of persona, and then for each persona, whether its is a buyer or an influencer, you have to have a value proposition. Again for most companies, we won’t talk about outside-in, but we end up creating value proposition which is inside-out. It’s absolute a common trap you all have.

Right? So it’s important that every now and then we remind ourselves – Am I thinking from what he wants to hear, or am I thinking from what I want to say? You can say one or two things which you want to say. First, by empathizing on what he wants to hear, you have to start with what he really wants to achieve, and then some way… find a way to take the conversation to a place where you also want to say a few things and give him a few new ideas. Right? You have to soften him enough to, or open enough, to listen to your ideas. I think once you get that right, I think you’ve got a entry into the account, and after that it’s all about… In B2B space, customer advocacy is the paramount from my perspective. So there are other things which you have to follow, but that’s really the starting point. If you get that right, I would say we have won half the battle because we are clear what we are trying to do. Otherwise, in some sense, we are throwing things, hoping something will stick.